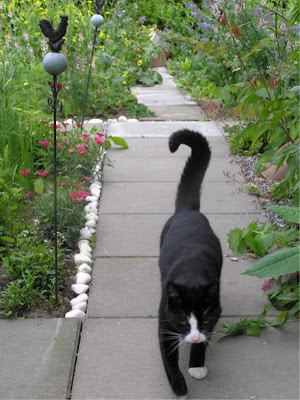 Jeeves in the potager

Because that's what I've been doing lately and am still at it as a matter of fact. 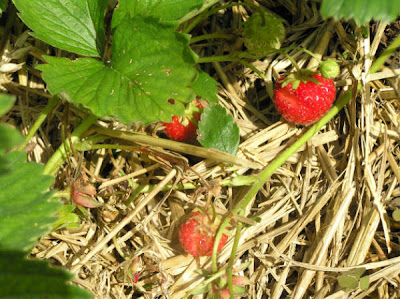 There was much picking of the strawberries, 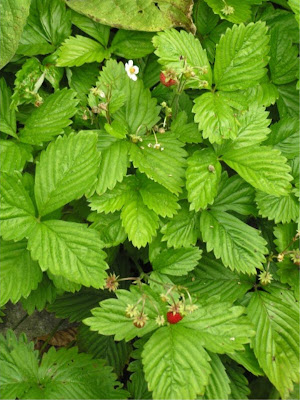 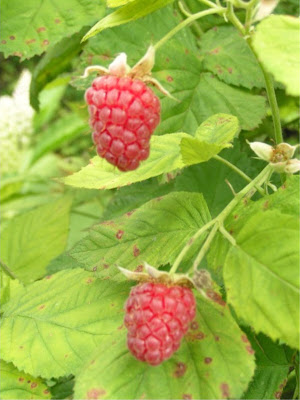 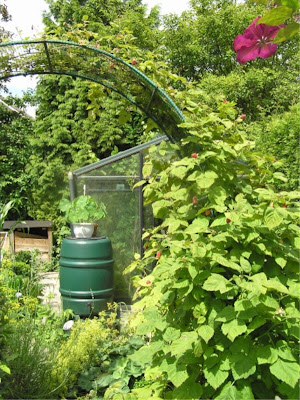 that are growing over an arch in my potager. 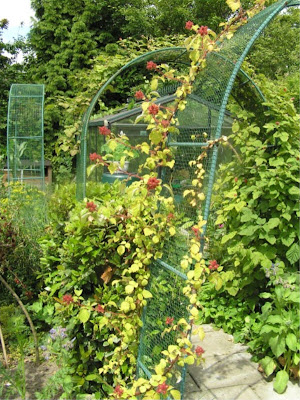 Also doing the arch thingy is my Japanese wine berry but those berries are not ready for picking yet. But picking there will be, and much of it. 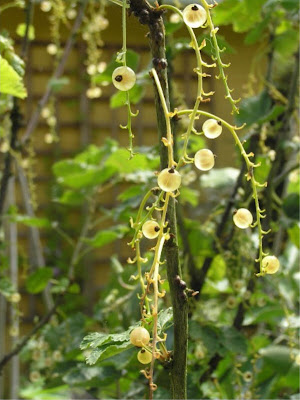 And I'm not the only one who's been doing the picking, the birds in my garden are getting their fair share of rich pickings. I've finished picking my white currants but left enough for the birds to enjoy. 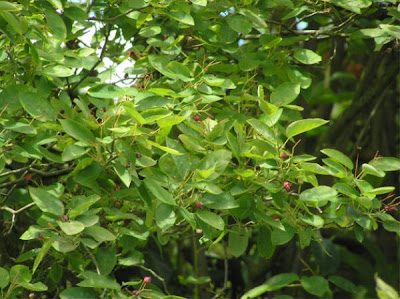 And as usual, the birds have been picking the fruits of my Amelanchier lamarkii, a tree that is called currant tree in my country, for obvious reasons. I had hoped to do some picking of my own but it was not to be as there are hardly any fruits left. 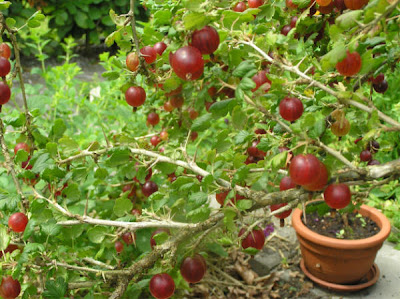 But not to worry as there are mucho rich pickings elsewhere like gooseberries, lots and lots of gooseberries in red 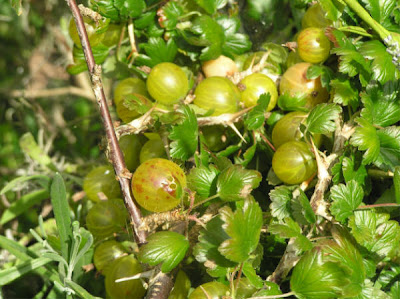 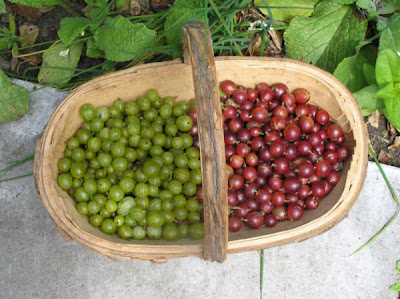 Yesterday I filled this basket with ripe gooseberries and there is plenty left to partake of some more rich pickings later on. 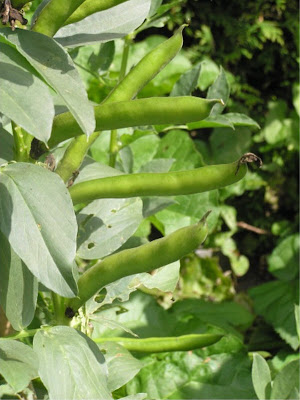 There was also much picking and eating (did I mention eating?) and enjoying, very much enjoying of the broad beans, especially when sprinkled with savory, a herb that also grows in my potager. 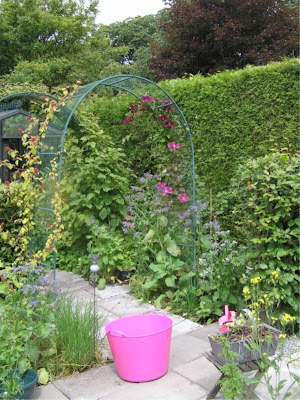 And as it is a potager, there are lots of flowers to be picked as well. And I have.With Blissful abandon. 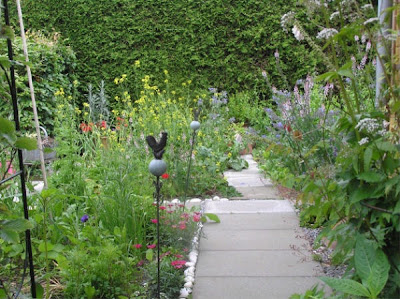 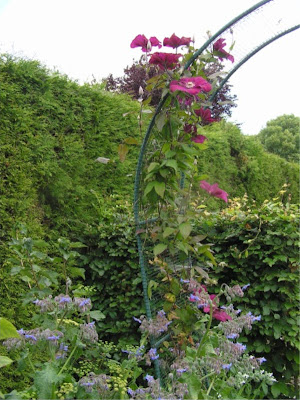 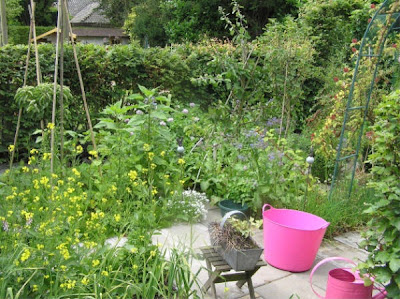 Gratuitous picks of my pretty potager 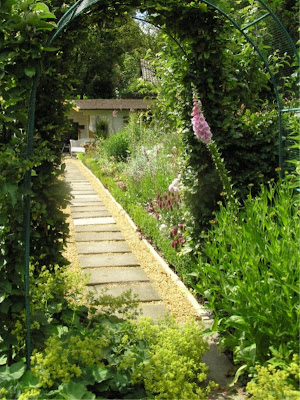 A sneak preview of my new border that also provides rich pickings of flowers. 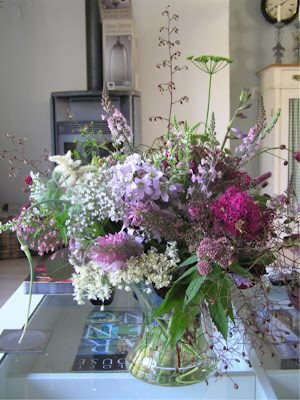 Very rich pickings. The only picking I haven't done is that of the nit. ;-)

I can see why Jeeves likes it in the potager. Your Potager is so beautiful. All those luscious berries for you and the wildlife. My mouth is watering just thinking about gooseberry pie. MMMmmmmmm

Dear Ms. "Non-Nit Picker" ? LOL
Your gardens are a feast for the eyes even if we can't share your literal feast of those berries !
I do no know of another place in this world, that can use every inch of a garden, to create life in.
I love the fact that Jeeves keeps an eye on it for you (how does he negotiate his contrat each year ? more tuna or salmon ? haha)
You truly are an inspiration to me , to ge off my A** and really GARDEN as you do girl : )

All those wonderful berries, yummy! And James and Fiona thank you for doing a dog-free post, and showing Jeeves, too. (What can I say? Cats are very egocentric.)

Your garden can't actually inspire me to follow in your footsteps, Yolanda - those delicious looking plants don't want to live here. But you do inspire some envy ;-]
The raspberries look wonderful on that arch.

Maybe our problems with growing berries to pick explains the tendency of Austin residents to pick guitars & mandolins?

Annie at the Transplantable Rose

It's all looking wonderful!
I love Jeeves' question mark tail! I've been picking lots of strawberries and a few raspberries as well.
Happy gardening! xx

I love the vase of flowers!

How rich you are, Yolanda! To be able to pick loads of vegetables and berries, is a dream that hasn't come ture for me yet.
Katarina

It's looking pretty delicious in your garden Yolanda! I don't know where I would snack first! But I would have to stop and say hello to Jeeves...he is a handsome cat! Gail

Your flower arrangement is gorgeous! I agree with Annie, just a tad bit of garden envy here too.

I love the bouquet from your garden! And the berries that don't grow here (I do grow strawberries, but the other berries don't like our humid summers).

Very fruity. (I am particularly taken by the artistically arranged bi-coloured gooseberry trug.)

It would be fun to graze through your bountiful potager. I like the new area. It maked me want a cutting garden.
Donna

Yolanda, I know you get about 100 comments a day, but I am stuck with a difficult gardening decision:

In a brand new garden with no boundaries between myself and the prying eyes of my new neighbours, do I plant a hedge or a fence? Privacy is an immediate concern, but the garden is small. I would love to hear your thoughts! I am leaning towards a compact upright (arborivitae) hedge over a fence.

I am going to search "hedge" on Bliss to see if I can glean any words of wisdom about hedges vs fences!

Thanks,
Julia in Canada

Your garden looks so wonderful, with the beautiful fruits and the Clematis. I just love the idea of growing the rasberry on an arch. I might have to find a place for that.
BTW, I thought Jeeves was going to a new home soon. Is he staying now?

That is just so wonderful! I was just thinking today how the raspberries have a habit of hiding underneath the leaves. Just when you think you have picked them for today, you see a whole load more hiding!

The garden looks magnificent, I am not familiar with gooseberries, they look delicious

Mmmmm, I want some berries. Your garden looks huge. How big is it. It must keep you busy.

It is so nice to walk with you through your garden. I look forward to seeing your rich harvest. We are a bit behind you in everything due to the cold and rain we have been having this month. Been a little frustrating for me .. I would like to have the sun back. Have a nice weekend, Andrea

It was wonderful walk through your potager, it really looks great and yummie all those berries! Well done Yolanda.

Greetings from Tyra in THE GREENHOUSE

I always love when you give us a tour of your potager. It is SO beautiful with its bounty. And even though I get a wee bit jealous and start being hard on myself for not having mine in such tip top shape as yours, I find such inspiration from what you've done.

I need to get flowers this beautiful for my kitchen! They make such a huge difference in a room!

As you know, I ADORE your potager! One thing: what's the secret to picking those gooseberries without tearing one's skin to shreds? I keep looking at the gooseberries for sale at the local garden center, and I'm tempted (particularly by one white one that claims to be "the champagne of gooseberries"!) until I notice again those thorns... yikes!

Yolanda,
with so many birds in our garden, I am not fast enough to pick any berries. I planted 3 Serviceberry bushes - one Amelanchier canadensis and two Serviceberry 'Princess Diana' a few month ago. Now American Robins (Turdus migratorius) are picking every berry from the bush.
No luck here either:-(
Gooseberry I love, but purchase them at our weekly farmers market.
Thank you for your visits and comments,
Gisela

Fabulous fruit in your garden! My currants too are usurped by the birds... before the even ripen! Lovely post reflecting the beauty and bounty of your world. Magical and nourishing. Mouthwatering!