Haven't blogged much lately but not for lack of material to write about. Last July, for instance, my worst nightmare came true when my oldest cat Vita disappeared from the Bliss garden. 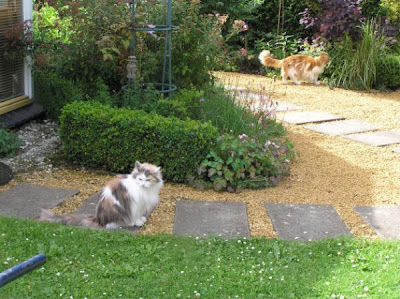 Since I moved here I was in the habit of letting some of the cats play in the garden while I was working outside so I could keep an eye on them. My old garden had been cat proof; no cat could escape from it and no cat could enter it from outside. Making the Bliss garden 100% cat proof turned out to be impossible and as all my cats were so well behaved and would come running when I called them, I let it be. And then, one awful day last July, Vita was gone. 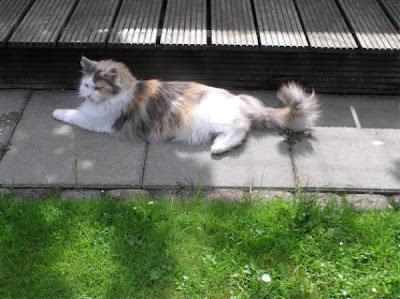 I searched for her everywhere; the garden, the house, the garden cottage, the garage and then further afield: my neighbours gardens, sheds, garages etc. but all to no avail. We even searched with an infra red
camera to see if Vita was hiding in the shrubbery but no, not a sign of her. 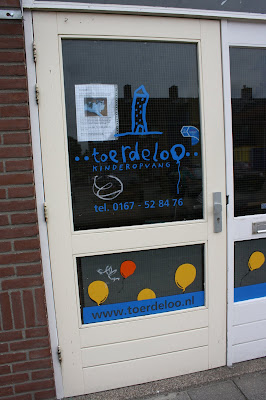 I made hundreds posters and put them up everywhere in the village, even in a nearby city where many fellow villagers go to shop. Posters were put up in and near supermarkets, parking spaces, daycare centres, at the vet's, the petshop, a flowershop, places where many people walked their dogs etc. I also designed & printed about 1200 flyers and put them in people's letterboxes. You had to be living in deep dark hole in my village not to be aware that Vita had gone AWOL.

I would search for Vita every morning between 5 and 7 AM and every evening between 10.30 and 1 PM as the chance of finding her would be bigger when it was quiet outside. I also searched for her via the phone and the internet. But however hard I searched, no Vita. 1 Week passed, then another but no sign of Vita at all. I was getting pretty desperate when suddenly one day I finally received a phone call from an old lady who said she'd seen her.  Went over to talk with her and to show her some pictures of Vita. She was adamant that that was the cat she'd seen. Vita is a Maine Coon and looks very different from your average moggy as she has long hair and her coat colour is also not that common; blue tortie and white/blue calico & white. After that initial phone call I got more phone calls from other people in that same area so I concentrated the search for Vita in that neighbourhood. But again no Vita. She'd been gone for almost 3 weeks and as Vita was not a young cat (almost 15yrs) she would not be able to stick it out for much longer. And then, at long last another phone call this time from a man who said he was actually looking at her while we were on the phone. He asked me to come straight away. 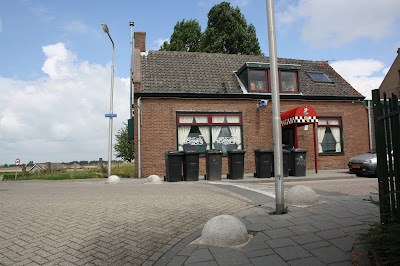 So we did. Brought a flashlight as it was late in the evening and already dark. Much to my relief it turned out to be my darling girl. For the first time in almost three weeks I was able to see her with my very eyes. My relief was utter, I was so glad to see her and know for certain that she was alive and reasonably well. But how to catch her? 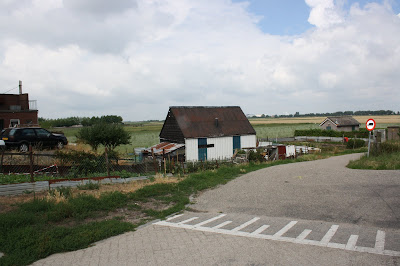 Because you'll never guess where she'd been hiding; in a kitchen garden next door to one of the local pubs. When we got there, Vita was running around in a poppy field, trying to get away from the flashlights that were pointed at her. The chap who'd found her had also brought a flashlight and he and his wife had been keeping an eye on Vita till we got there. So we had a party of 4  but however hard we tried, we couldn't catch her and in the end Vita hid in a pile of wood and we couldn't get at her. 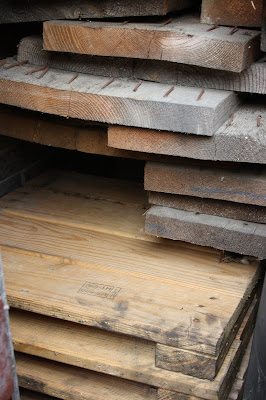 Judging by the amount of fur that stuck to the wood, this had been Vita's hide-out for at least a week. As we could not get her out of there, I decided to let her stay there and come back the next morning. It was one of the hardest things I've ever had to do; leaving Vita and return home empty handed. I had brought some catfood along so I left food for her near the pile of wood and went home with a heavy heart. 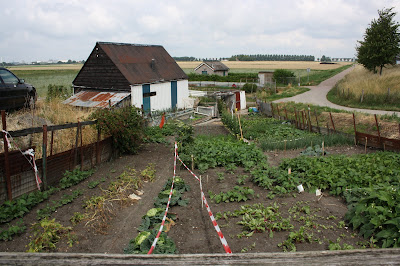 After a mostly sleepless night we returned the next morning around 5 AM. The catfood near the woodpile was gone, the plate licked clean but I had put another plate of food next to a gate bordering on the poppy field and that wasn't empty. So where was she? To eat the food she had to leave her hidey-hole. As the other plate of food was untouched she had not gone into the field so she had to be close to the houses next to the kitchen garden and poppy field. 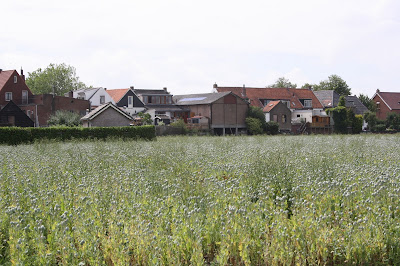 Off we went to comb the whole area with a fine tooth-comb. We had searched for about an hour when I suddenly heard a noise coming from under a shed I was quite close too. I went to have a butcher's and this is where I found my Vita. 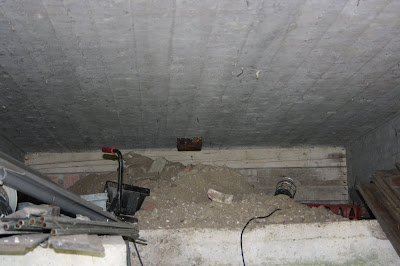 She was right on top of that pile of rubble, her head almost touching the ceiling and with her back against the wall. How to get hold of her without her running off again into the back of beyond?

There were some plastic chairs there so I sat down and surveyed the situation. I'd sent the under-gardener off for a thermosflask of tea and some sandwiches as we hadn't eaten a thing since we'd left home. 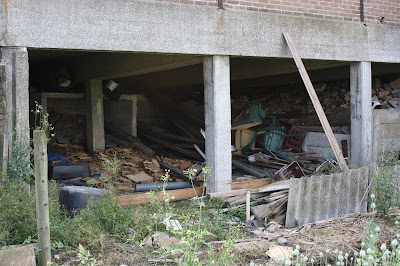 I knew the minute that either one of us would come too close to Vita she'd be off like the proverbial bat out off hel. What to do? I could wait until the next day, Monday, and try to either beg, borrow, buy or steal a trap so we could catch her.  But frankly the thought alone made my heart sink. I wasn't going to wait for a whole day, or worse maybe even several days before I could finally hold Vita in my arms again. 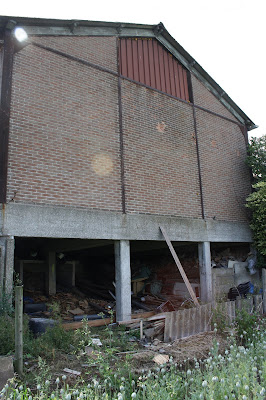 So I came up with a cunning plan. After the under-gardener had returned with the tea and sandwiches I went home to get some netting & other stuff that we needed to close off the three gaps between the pillars (see pic above). It took us about 1 1/2 hours to close off all the gaps so that not even a mouse could escape. We checked and double checked that we had indeed sprung the trap. We had. Within 5 minutes Vita was safe in her carrier and after we had removed all the netting we returned home triumphantly. 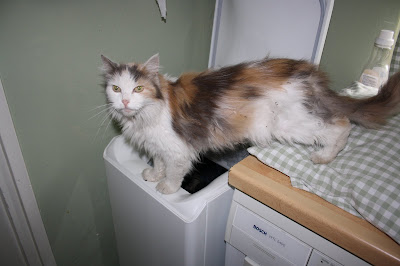 As soon as we got home I popped Vita in the utility room and gave her a thorough check-up. Apart from being as thin as a rake (went from 3.8 to 2.6 kilo), ever so slightly dirty and sans her last 3 canines, Vita was fine, remarkably so. She had no ticks, fleas, earmites or other nasty beasties. Cleaned her up a bit and fed her. Then I stumbled into bed and slept for 4 solid hours, I was exhausted. At long last my darling Vita was safely home. 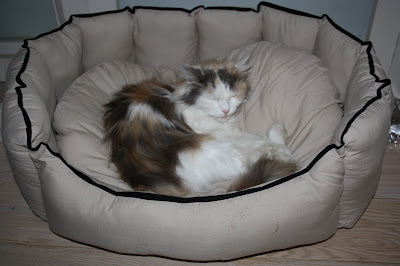 A lot of missing pets are never recovered simply because their owners gave up searching for them too soon. My Vita was found after 19 days. Another cat in my village, that went missing on the same day as Vita, was found after 30 days. If your pet is missing, DO NOT GIVE UP. Keep searching, your pet has NOT disappeared into thin air, it must be somewhere and somebody must have seen your pet. I got my Vita back because I'd put a flyer in the right letterbox, Dido (the other missing cat) was found because of an add in the local rag. Whatever you do when your pet has gone missing: do not give up!

I mentioned earlier that I searched via the internet as well for my Vita and here are some links to sites that I found that have been invaluable to me. If you have pets please bookmark this page so you can always find the info here if, Valen forbids, one of your pets goes missing.