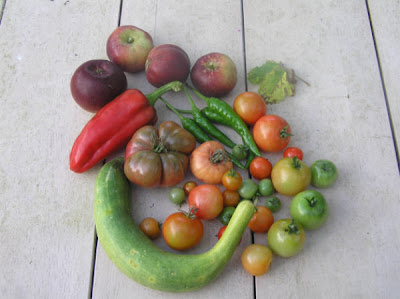 This post certainly is a bit of this and that and the other, quite a mixed bunch in fact, just like on the pic above which shows part of what I've harvested lately. The tomatoes are almost finished now but fortunately there is more to look forward too like 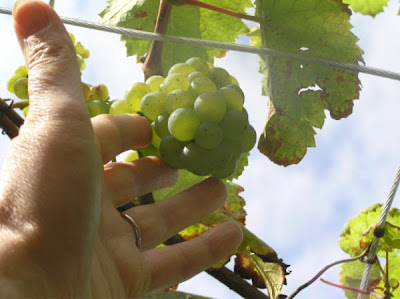 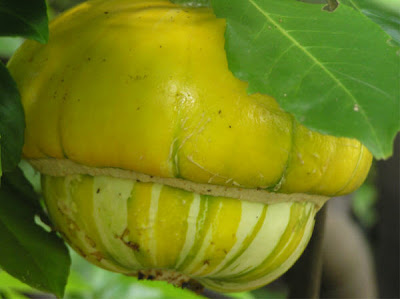 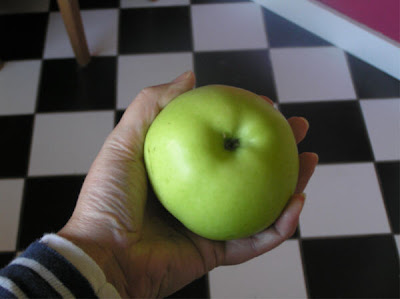 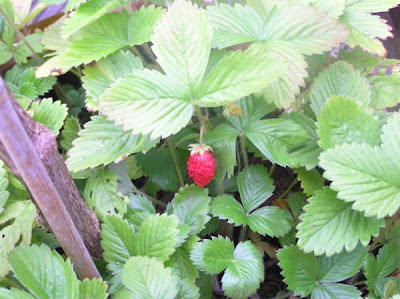 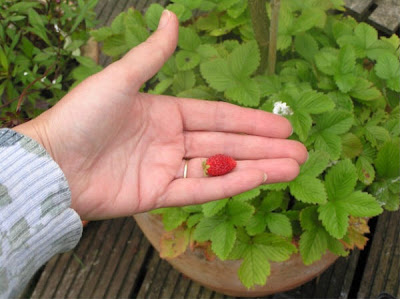 They may be small but they cause quite a taste explosion in your mouth. They are the strawberriest of strawberries ever!

But it's not all fun and games here at Bliss, there is also a lot of hard work to do. Here's Jeeves's not so subtle hint that I've got a spot of weeding that needs to be done. 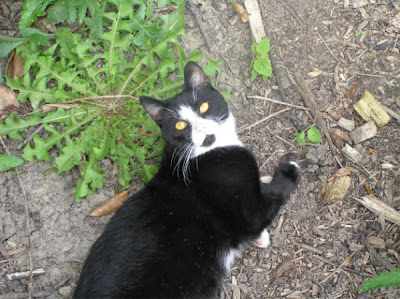 Thanks for pointing that out Jeeves! ;-)

I haven't been able to blog much lately because of all the work that needed to be done in the garden. Recently all the conifer hedges (all 80 meters of them) were cut. The under-gardener did all the cutting but guess who ended up clearing all the hedge trimmings away? That's right, moi! 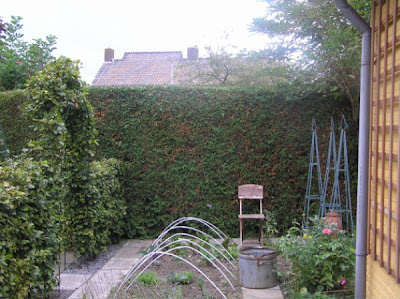 Fortunately I'd bought a few big bags recently to put all the trimmings in. 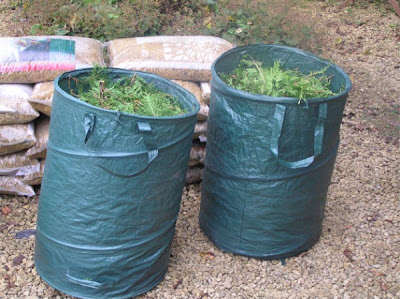 They are ever so handy as you can fold them away when you don't use them so they don't take up much space. 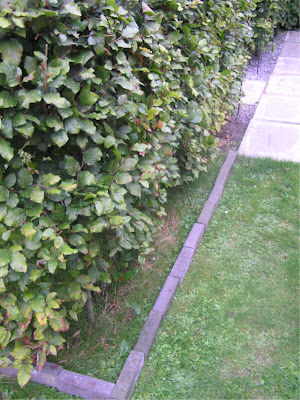 My project of putting gravel underneath the hedges round the potager is almost finished, just one more hedge to do. 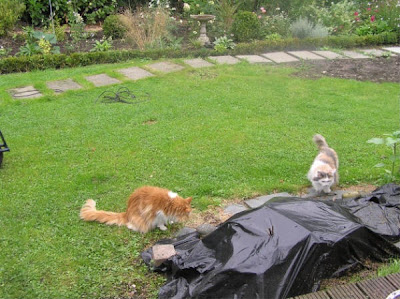 Here are Vita (R) and Dolly pointing out another eyesore in the garden. Well, a former eyesore that is, because it's gone now. This is what it looks like as of yesterday. 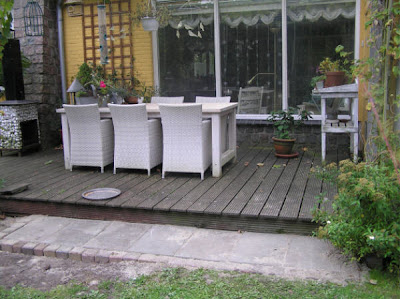 Now we have ample access to the patio area, before it was such a narrow space to manoeuvre in, courtesy of the former owners. 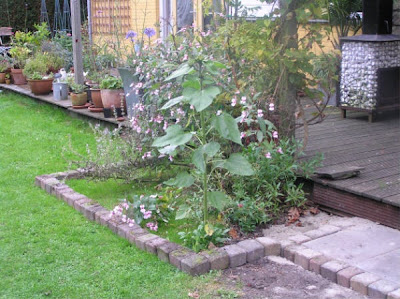 I've just started work on the new flower bed next to the new paved area in front of the decking. It will look great once it's finished and all the plants are in. 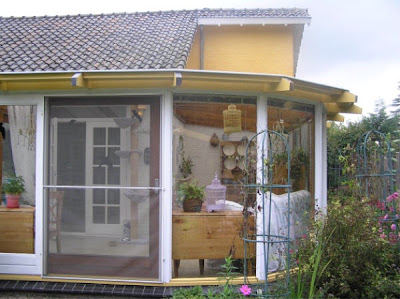 For the last 2 months I've been painting the conservatory in between all that rain we'd been having. It's been rather a slow job thanks to the many showers, but I'm nearly there. 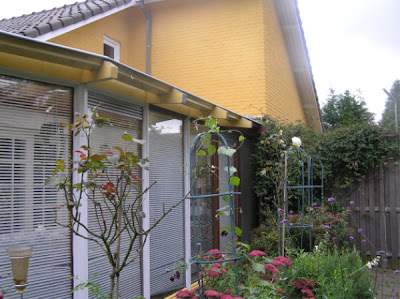 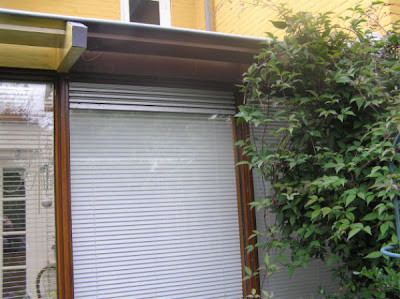 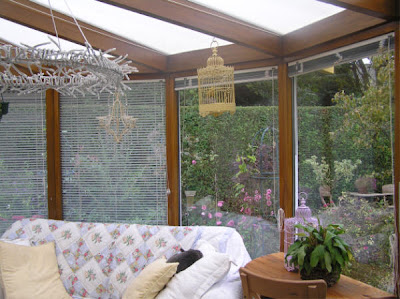 Well, on the outside that is. The inside is quite a different story altogether. There I still have to get rid off all that brown paint. Never mind, it will give me something to do in October otherwise I might get bored.:-)

After all that hard graft it's time for some fun again, after all we at Bliss have a reputation to keep up. Even though it's getting towards the end of September the garden is still full of flowers and there are quite enough to make a nice flower arrangement or two. This is what I bunged together last weekend; 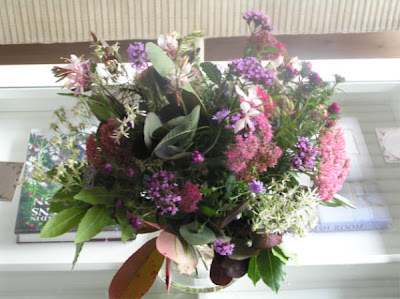 and here is another one, quite cheerful and sunny, don't you think? 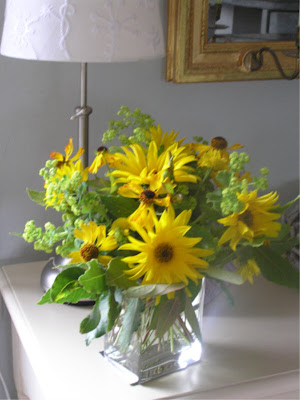 You want an easy hobby, try line dancing. In gardening, there are going to be certain projects that are physically taxing. Gardening is more difficult than surfing and scuba diving, yet, curiously, ranks dead even with fly-fishing at the highest level.
The Renegade Gardener

Glad to see that you're keeping busy! Everything looks fabulous, including all your big projects.

It always makes me smile to see your cat companions.

Gosh it is a busy time Yolanda....the hedge looks good though and its another job done.....
I couldn't agree more, I love wild strawberries and grow them every year for the grandchildren, they love them.

I also use the collapsable bins, they are great, so convenient....

Your garden and conservatory are looking lovely....all your hard work paying off and providing a beautiful space.....tku for sharing....

You have been very busy in your garden, now autumn and winter can come....
Groetjes, Monika

Gosh you have been busy! I bet looking at your newly trimmed hedge now makes up for all the hard work in getting it done – it did with mine too ;-D

Oh… you have reminded me of all I need to do in the garden too – I have been nowhere near it (except to take video for GBBD) and I have much to do too. Maybe tomorrow :-D

Ah… your conservatory changes are looking great and I love your yellow and white scheme :-D

I have bags just like yours, they are ever so handy.

Congratulations on your Blotanical nominations!

Hello,
I love your hedge....I live in Chicago, IL USA and would love to have a hedge like this on my propetry line! Can you tell me what shrub you have planted? How far apart would you plant for a quick barrier?

Always busy, you are! Things are looking mighty fine, Yolanda!

Yolanda, good to have you back and posting :)
Cats are true managers-helpers - they succesfully point out which job has to be still done.
Greetings,
Ewa

I should get one of those bags... I can see that you've been very busy - good luck with your next painting project!
/Katarina

I have rather gone off wild strawberries. I have a couple of plants that scuttle about by my office and produce occasional fruit. I picked one the other day and it seemed to taste different: on investigation the reason was obvious. My mouthful of strawberry included a very chewy slug. It is not a combination likely to excite most MIchelin starred restaurants.

I'm sure you will never get bored...with all the plans and ideas you have! You made a good job...in the garden as well as in the conservatory! Great!
Barbara

I love posts with a little bit of this and that; it always adds up to a lot! Vegies, fruit, kitty cats and hard work...see that's a lot!

Hi Yolanda, I see all your hard work is really paying off in producing delicious treats, and even more beautiful blooms and lovely borders and hardscape.

Lovely, I have some grapes too, that the reason to hava a garden.

I am so impressed with all the work you've been doing! That's my kind of stuff!!!!! I'm really loving the gravel under the hedges. And, of course, I love the yellow painting that you've been accomplishing. Great job!

Love your vases of flowers. It's always nice to be able to bring some of the garden inside.
Reading that quote at the bottom, and wondering how true that is. Is gardening really so difficult? Well, I've never surfed or scuba dived, so I can't really compare. ;-)

Its amazing how sometimes life takes over and blogging ceases! But I see blogging as an autumn/winter hobby. A way of staying in touch.
As always your garden still produces blooms at this time of year! Lovely!

So I'm not the only one being busy!? ;D Well, there's a lot to do right now in the garden. It must be great still harvesting so much. We have more or less apples and pears. :) Love your bouquets!

Have a nice weekend! Kram Karin

Visiting Bliss..
A kitty greets me, Jeeves is looking good and you are busy as always.
Thanks for visiting.
Cheers Gisela

There is a lot of healthy 'this and that' happening on Bliss. I,ve by now developed a conditioned reflex: as soon I click on your link, my mouth starts salivating in anticipation!

Busy is good! And the rewards are great -- veggies, flowers, lovely gardens to look at while dining outside.

And how nice to have those helpers in the garden to show you where the weeds are. Big ones, too, just like in my garden. :-)

YE, all very impressive! the kitten at the top is completely over the top cute! your posts are always and inspiration to me, both the friendly, humorous tone, and the beauty and neatness of your garden! it's such a pleasure to visit!

Hi Yolanda Elizabet,
Your garden, as always, is beautiful! Your kitties are adorable! Think I could borrow a couple. We are having a rat problem and I don't even want to go in my garden. Yuck! I love those big bags..I'm going to get some.

Hello Yolanda, thanks for stopping by. It sounds as though you have had quite a lot of work and some ahead of you. Love your Jeeves. He would find weeds in our garden too, but I have not had time to get rid of it lately, but will this weekend if time and weather permit. Take good care! Andrea

I'm glad it is not all work at Bliss. Oh what are a few weeds!! If your garden was perfect I'd be worried about you. Love what you did to the patio and your table and chairs. Those would look great on my patio. Glad you are getting your painting done. I have been doing some my self. But not as hard as yours looks. Beautiful job.

I just wanted to add that I read where those little strawberries (at least the hybrid tiny ones) have their origins in the Netherlands. My 'Pink Panda' does, and I imagine 'Lipstick' does as well. I am still picking those flavor-packed things! They remind me of the ones my next-door-neighbor and I used to pick when we were kids. They grew in patches next to the railroad beds and we even made maps of where the patches were located. So much flavor in a tiny package!