Look Out, There's a Dinosaur In the Garden! 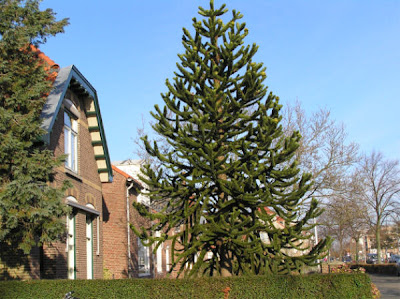 also known as the Monkey Puzzle tree. But what's it doing in the garden? Do some of us have a fondness of prehistoric monsters? Are we nuts about ugly things? Don't tell me there are people out there who actually like this tree, because what's to like? The razor sharp, needle like leafs that coat both the trunk and all the branches from top to bottom? 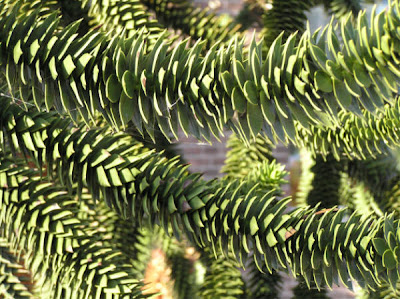 The fact that it grows to a 60 to 70 ft height or even a whopping 150 ft in favourable circumstances? And you do know it is going to be about 30 tot 35 ft wide? Do we really have that much space to waste on this worst of all Stephen King's nightmares come true?

And it really is a dinosaur. Apparently it was already visually obnoxious about a cool 60 million years ago. And it is still here today. Why? 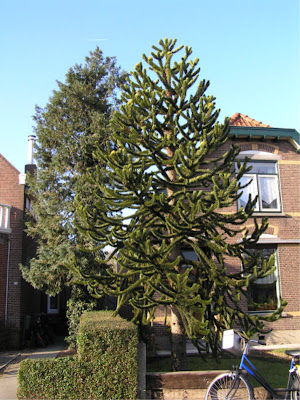 Well, we got some Brit to thank for that: Archibald Menzies (naval surgeon and botanist) who attended a state dinner in Chile late in the 18th century. And there he was served some seeds from the Araucaria araucana tree (yes, the official name for the MP tree). Apparently the seeds are almond sized and tasty so Menzies ate some and put some in his pocket, forgot all about them and went home to the UK. There he unfortunately recalled that he had some very special seeds in the pocket of one of his coats and these seeds were planted at the Royal Botanical Gardens at Kew where, alas, they germinated and turned into little trees. (Thanks a bunch, Archie!)

In the early 1800's another British chap (they're all over the place, aren't they?) after observing this well-armed tree, said it would be a puzzle for any monkey attempting to climb such a tree. Hence it's name. Personally I think that any monkey worth it's salt would run screaming for its Mummy as soon as it would clap eyes on this tree. Such a sensible reaction! I felt like running and screaming when I first was visually assaulted by that horrible tree. 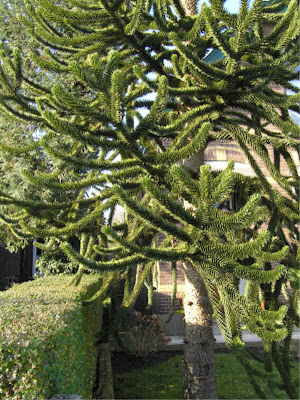 Back to Britain again, where the name of the tree and the story behind it, tickled the fancy of the general public and having a Monkey Puzzle tree became all the rage. Unfortunately it spread like the proverbial black plague to the European continent as well.

Ever wondered why even the most die-hard of all treehuggers won't touch this tree, not even with an exceptionally long barge pole? Because it's bloody lethal, that's why! Look at those sharp and stiff leaves. They last for 10 to 15 years, the little blighters. That tells you something about how tough they are. Not forgetting those cones the female trees produce, which are 6 to 12 inches long and look a bit like coconuts. It's really not very clever to stand beneath a female tree when she's shedding her cones! 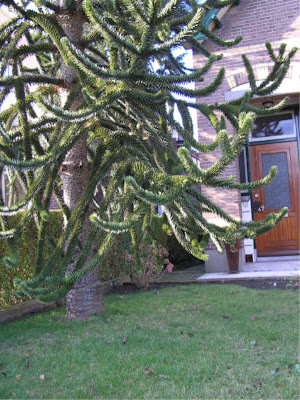 Dinosaurs have been extinct for a very long time now, but we're still stuck with this horrific botanical dinosaur and most primitive of all living conifers. Isn't it high time it took it's final bow, went to meet it's maker, kicked the bucket, was pushing up the daisies, in short, died?!

How about cutting them down? Chopping them up into little pieces, burn the pieces, then bury them and stomp on them a few times for good measure. Maybe do a little dance on the remains? There, that will teach them!

And all the little baby Monkey Puzzle trees we can dig up and sent to Chile as there seems to be a shortage of them over there, high up in the Andes, where there is lots of space to grow and no monkeys or people to upset.

And of course removing a Monkey Puzzle tree will leave a big gap in the garden, but that can easily be filled with something nice like an apple or pear tree, or a lovely Amelanchier. They are so much nicer, don't you think? There, I feel much better now!

The world we live in is a garden

We are farming our future

Harvesting the things we grow.

Posted by Yolanda Elizabet Heuzen at 9:06 AM

Nice, I have seen Monkey Tree in Sweden.

I prefer amelanchier, fruit and other trees too ;-) !! But a nice story behind this Monkey Tree!

Is this Monkey Puzzle in your own garden, Yolanda Elizabet? Or just visible from your property?

As far as I know, in the US they can only survive in the Pacific Northwest area of Washington State, but maybe one of your other readers has seen them in other states.

I'd heard about Monkey Puzzles in English novels, and recognized the tree when we were in a town near the Mount Saint Helens volcano area.

They sure don't look user-friendly!

Annie at the Transplantable Rose

Uh oh. Dare I say, (after scandalizing you with one of two postings on orange flowers) that I like these trees? The dinosaur aspect of them appeals to me (same as with Metasequoia and Ginkgo; but then I can grow both of those and I wouldn't try with a MPT. They DO survive up here in some places--a friend of mine on the south shore of Nova Scotia (zone 7-ish) has brought one through the winter outdoors several times. I content myself with growing its relative, Norfolk Island pine, in a container in the house.

Yep! they are all over the place here in England. You will see them in people's front gardens.

Whew Yolanda, did you get out on the wrong side of the hedge today?? Poor girl I hope you do feel better after venting about the Monkey Tree. It would be scary to have one hanging over the hedge if you didn't want it there. One would certainly not want this monkey on their back. I have never seen one so I will reserve judgement on them.

Is it in your frontyard!? It really looks huge but looks nice in the second pic. Whatever you do about it, it was nice reading your text about it. Have a nice weekend! :)

Hi all and welcome to Bliss!

* Hannele: I see those darned trees all over the place here. Yuck! ;-)

*Annie: fortunately I don't have this tree in my garden nor can I see one from my property. But they are all over the place in my country where they don't belong. People put them in tiny front gardens, not realising how big they get and what a hazard they are to small children.

* Lisa: just a rant, to let off steam, we all need that from time to time and it was rather tongue in cheek. ;-)

* Carol: if it was in my garden it would have been long gone, but this tree is in somebody else's garden so no chopping that tree down, alas. I just carefully avert my eyes when I walk past that dinosaur.

* Silke: they were all the rage in the seventies as a kind of novelty tree. But nobody actually knew how big they were going to be and how dangerous its leaves can be, they really are very sharp. Your little MP tree dying turned out to be a good thing. ;-)

* Karin: fortunately not, it is in somebody else's front garden. Glad you enjoyed my little rant!

Have a wonderful weekend, all of you!

Hi there,
I stumbled upon your blog through a google alert that I have set up for the title of my book. (I won't mention what it is lest you think I'm a spammer.) But I'm a gardener in CT, US and a mystery writer, and reading your monkey puzzle blog has given me a good idea for my third book. So many thanks! I look forward to going back and reading earlier posts. Cheers.

I've heard of monkey puzzle tree, but never seen one in person. I think I can now safely cross it off my list of "things to grow". Thanks for the warning and the history lesson :-)

I have seen lots of those trees in England, and nearly always they are much too big for the small front gardens.
I wouldn't like one of those in my garden or neighbourhood, but I found your explanations very interesting.
Have a nice weekend, groetjes, Monika

I first heard of the Monkey Puzzle Tree from the old movie "The Ghost and Mrs. Muir." (Gene Tierney & Rex Harrison) In the movie, the seacaptain/ghost had planted a Monkey Puzzle Tree in the garden of the house. I thought it sounded like such a cool tree (I was 8 when I first saw the movie). I've never seen 1 in person. From what you say, that's just as well.

I remember loving that movie when I was little. Now I'll have to rent it to look for the tree.

I've seen loads of these trees in Ireland as well, mostly in the Dublin suburbs. But they always seem too big for the little gardens the grow in. And a lot of times, someone has chopped the top off, and it looks really ugly then.
I personally think it looks interestingly alien, but I never grow pointy and spiney and razorsharp plants in my garden.

What an unusual tree. This is the first time I've run across anything like it. It doesn't sound like anything I'd want around--well, maybe if it came in a miniature size and one could keep it in a pot as a novelty.
Aiyana

Oops. Used the wrong ID. The comment by Carlene was actually mine.
Aiyana

I want one!!! I'm pretty sure they are not hardy in zone 4, but I want one to give my obnoxious deer something to think about! (And my creepy neighbor guys! >:)

As much as we have in common, Yolanda Elizabet, I'm afraid I'm going to be another voice of dissent. I love this tree! I think it looks graceful and unique. If the lower branches present a problem, just cut those off. Don't throw the baby out with the bathwater!

Hilarious! These things are lethal, I have to say. We have enormous ones all around historic neighborhoods in our area. Shudder!
~Angela :-)

Horrible! I have seen them here, too. Personally I do not like any kind of pine trees in a garden. In our old one we actually had 4 (!!) which we had removed because they completely covered the front. I like other trees much more like amenchalier, i.e. Good post! Have a great week, Andrea

Hi Yolanda,
Well avery nice story about a beautiful tree. And very ancient as well. Must be worth a fortune.
They are rather unpleasant to touch, that's a fact.

Well beauty is in the eye of the beholder.

It sounds like an agave, doesn't it, and I know you don't care for those. Some people just love the touch-me-nots, I'm afraid. I may even be one of them, although this is the first I've heard of the monkey-puzzle tree. What an oddity.

Nice blog. I will keep reading. Please take the time to visit my blog about Orchid Care