That's right, it's time for an elocution lesson. As a garden connoisseur you are bound to have heard of  Dutch garden designer Piet Oudolf but if you are non Dutch speaking do you also know how to pronounce his name correctly? 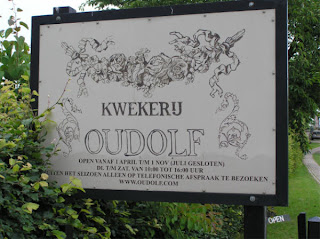 When I talk with non Dutch garden geeks who are raving about Mr Oudolf I often have to ask them to repeat that name as it's mostly so badly mispronounced as to leave me clueless of whom they are talking about. 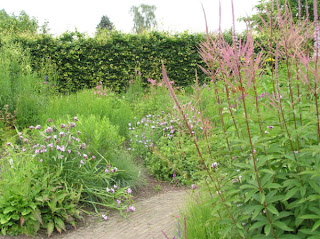 Joe Swift from Gardener's World is a prime example of how not to garble Piet's name. Last year in June he presented a GW programme about Prairie Gardens where he mentioned a well known designer by the name of &^$# gobble (**&^ dy *&#@ gook. What? I am Dutch and have heard his name mangled in unbelievable ways before but this was really bad to the power of über cheese. 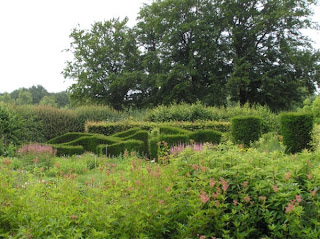 So here goes, please pay attention and that goes for you in the back as well:

Piet is difficult to pronounce when your native tongue is English, I readily admit it, but lets have a go at it anyway: Piet is pronounced as ....... Pete.  Sorted! 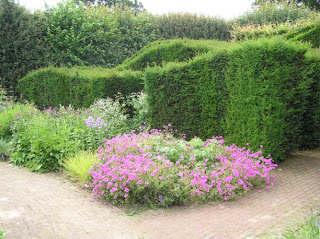 Oudolf is slightly more difficult but I think you will be able to pull it off if you put your back into it.

First syllable  sounds exactly the same as ou in house or ouch. Now say ouch, now say it without the ch. Done. 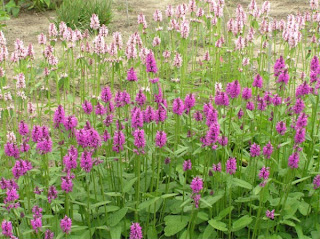 This free elocution lesson was brought to you courtesy of your friendly Internet neighbourhood gardener Yolanda Elizabet from Bliss!

O, and if perchance you know Mr Swift personally, please put the man out of his misery and direct him  Bliss-ward.

NB all the pictures shown in this post were taken in June 2008 at Piet Oudolf's garden and nursery.

How simple was that?? I enjoyed the lesson. It is so easy and I won't ask myself how to pronounce his name every time I see it written someplace.

I have informed Mr Swift on your behalf.

I knew Piet was pronounced Pete, but I've heard his last name pronounced Ooldolf (or Ewdolf)... since that makes sense with German pronunciation, I used that, too. Great to know it's OW (and also reinforces what I found on my short visit to Holland: Being fluent in German was great in that I could read and understand most every sign and packaging label, but the pronunciation left me completely clueless!).

Now I just need to know--how do you say Van Gogh correctly?!

And does Mies have the same long e sound as Piet?

I've been pronouncing Piet correctly, but, I was off just a tad on his last name. Do you like his garden designs?
gail

Thanks so much for the explanation Yolanda. We spent a few days near Arnhem a few years ago when we visited the plant festival at Bingerden. Could kick myself though for not visiting Piet Oudolf's nursery and garden :(

Ah, thank you Yolanda! At long last I will no longer sound like an idiot!

LOL! Well, I was very close. I was saying a long o but other than that I had it right. thanks for the lesson!

Ow! not Ooooo! Thanks for that. Now I can feel like a real gardener.

Now I'll be repeating Piet Oudolf's name all day long. It isn't so hard after all.(No fairies killed in this comment.)

Mr Swift has replied.
His response is, I fear a trifle coarse -
"So now I bloody know- why can't he spell it properly then?"
Never fear, I will keep my eye on him and if he mispronounces this, or any other Dutch word, again I will prod him with a staff of sharpened hazel.

Thanks. I read his name a lot in Chicago but never knew how to pronounce it. I had been pronouncing it pea-eht. Oudolf, on the other hand, I had guessed correctly.

Thanks Yolanda..
I have often felt that names should be pronounced the correct way. At least we can try..But with the english tongue names are spoken as is.
- Cheers Gisela.

Thanks for the lesson on this great gardener's name. Having been born in Zaandam but growing up in Canada, speaking English, I must admit I had it almost right.

Oh dear, I'm afraid my Alaska translation was something like "Pee-eht Oo-dulf." Rather dreadful, but at least I never said it out loud (or on the telly). I think I'll write the true pronunciation in permanent marker on his books in my library so as not to botch it again.

Good to know! Thanks for the pronunciation lesson.

Thank you, Yolanda, for the pronunciation lesson. I said it out loud, following your tutelage.
So now I am one of a dozen gardeners in the U.S. who can pronounce Piet Oudolf correctly. Yay!

My friend and local nursery owner, Ruth, who once introduced Piet at a nursery get together somewhere in the US set me straight about his name, but it took some practice. Your method is much more memorable. I want to see James with that sharpened hazel stick enforce the law of pronunciation you have pontificated. Repeat after me, bright golden haze on the meadow, like window. :-)
Frances

My friend and local nursery owner, Ruth, who once introduced Piet at a nursery get together somewhere in the US set me straight about his name, but it took some practice. Your method is much more memorable. I want to see James with that sharpened hazel stick enforce the law of pronunciation you have pontificated. Repeat after me, bright golden haze on the meadow, like window. :-)
Frances

I've been saying it wrong for so long, I'm probably incorrigible at this point (I can't resist saying Pee-eht !) but thanks for the heads-up !

Ha ha, I can do it, but unfortunately with all the different accents in the UK you may still have problems understanding us lol!!

Have you got that off your chest now Yolanda? ;-) Actually I must confess I had pronounced it ooo-dolf. I stand corrected. I visit the lovely Piet Oudolf border at RHS Wisley on a regular basis. It is right next to the apple orchard!

Every time I read the man's name I have wondered how to pronounce it. Thanks for the easily understood and clearly described elocution lesson. Now, if I can just get it into my long term memory. . .

thanks for the clarity, i was guilty, though not too far off!

Clear, concise and cogent! Thanks for the lesson. So easy when you make the comparisons to words we are familiar with.
Aiyana

I will practice. I am looking forward to lesson number 2 in simple Dutch pronunciation.

It was the Ou that caused me confusion - I went For Ooo.
Bad guess - Will try to fix Ow in my mind. Thanks for the lesson!

Yolanda girl .. I am smiling here from your lesson : )
It brings me back to those four years we spent in your wonderful country and how generous the people were with our humble efforts to speak Dutch .. everyone was so willing to help us out and we appreciated so much !
I miss those wonderful times and I have lost what little Dutch I knew but every time I come here .. well you make me smile with the memories again !
Thank you
Joy

Yolanda, thank you so much for the lesson in Dutch. I bow down to your speaking capabilities. I always wondered how to say his name, and how embarrassing really? Sending Oklahoma sunshine your way my friend.~~Dee

Yolanda, this is extremely helpful. I love his work and continually use him as a reference but always get myself in somewhat of a pickle when I try to pronounce his name! Not any more though.

Yolanda thank you for the lesson and introduction to the Dutch landscaper.
I miss seeing your brood on your sidebar...oops...there they are at the bottom of your blog....(=^.^=)

Hi Yolanda! Thank you for the explanation. And your photos are beautiful as well.

LOL who'd think such a simple pronunciation can be garbled so much? In Asia my friend and I are always translating everyday exchanges between Asians and westerners-both sides are speaking English, but due to differences in pronunciation, intonation and choice of words, neither can understand each other!