For those unfamiliar with the catchy ratsong by UB40, click the vid.

And she did. Surprise lived up to her name and caught a young rat in me garden before I was even aware of the fact that we had a rat problem. Now that I have chooks I'm even less keen on rats than before.

As you can imagine my relief was great when Surprise caught the rat. Less so when the killing of it took ages. I am familiar with the biology and the psychology of torture inflicted on prey by cats but I am not happy with it. From where I'm standing rats are people too, you know, it's not their fault that the human population regards them as vermin.

Surprised fixed that rat good and proper because some time later I found the gruesome remains of it; 2 hind legs, a tail and a ripped belly spilling entrails. The rest had been eaten. Ewww! And no, I did NOT take a picture of it and count yourself lucky coz it wasn't pretty.

Rats in the garden seem to be de rigueur lately, especially among former Gardener's World presenters. Having me own rat in the garden must mean serious rockage gardenwise for yours truly.

And as if one rat wasn't enough I've been sowing them in my potager lately. Rat's tails, I kid you not. 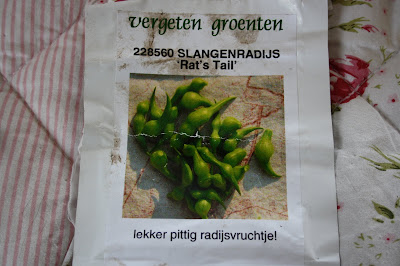 It's an oldfashioned radish called Rat's Tail for obvious reasons. They are part of the Forgotten Vegetables collection of seeds that you can buy here in Dutchland. I've bought several unusual and mostly forgotten vegs and fruits seeds to try out this year and will blog about the results at a later date. 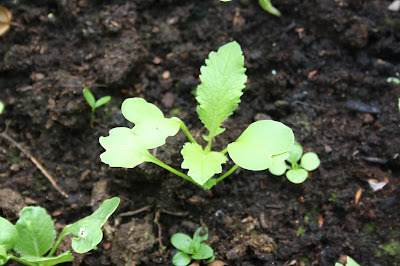 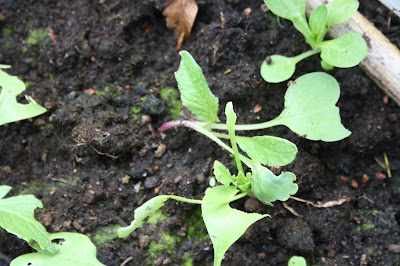 BTW if you have a rat problem in your garden I have a super ratkilling kittycat for hire and her fee is quite reasonable: a saucer of cream, some smoked haddock and a nice warm lap.
On a more personal note: my MIL was cremated last Friday. My dad was diagnosed with cancer shortly before Christmas, my MIL with bowel cancer 2 weeks later. My dad's prostate cancer is under control now so that's quite a relief. MIL was less fortunate; because her condition was so poorly an op was out of the question. She got radiation treatment instead but that didn't work out.

Last February my dad was operated because the main artery in his tum was about to spring a leak. The op was succesfull but my dad has not recovered completely from it. He still is very weak, his feet drag behind him when he walks. He was always such a robust chap, so this is quite worrying and my Mum isn't in the best of health either (Alzheimer and partial loss of right hand and leg function due to a stroke). All in all life hasn't been all that much fun for the last 10 months or so. 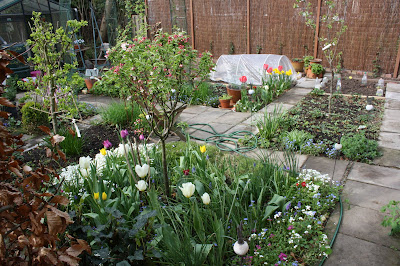 I'm leaving you with a picture of my recently much enlarged potager. More about that in my next post.

Yes, we know about rats in California, too. What I have learned from a good friend is this (worth repeating). If you mix corn meal with plaster (one part of each) and put where the kitties cannot reach (but the rats can) they will eat it and die a death that probably rivals a kitty catching death, but will not leave a carcass around that say a kitty or dog might find should you have opted for rat poisoning. Not a happy subject, but a necessary one sometimes. Good for you for having Surprise to help out!

Since Surprise catches rats, does she chase the chicks around too? I have 2 dogs who takes care of rats even when I bring them for walks. Sometimes they chase the rats into my neighbours' compound. Shhh.....

Nice photo of Surprise with child.

I can do without rats. I do have field mice and meadow voles, but I consider them to be part of my habitat. What I have noticed is that the tree rats (squirrels) have become very insouciant and bold since I no longer have a cat on patrol in the yard.

Your potager is beautiful. Sorry your immediate family is experiencing ill health. My parents are 86 (Dad) and 83 (Mom) and while they are in good health, they are smaller than they used to be and appear to be more fragile. I emphasize "appear" as both of them seem to be strong as oxen and stubborn as mules. I figure there will be no lingering illness there, there will be some catastrophe (like my mother getting kicked in the head by a cow she is immunizing or something like) that escorts them off the planet and into the next phase.

You have had your hands filled with much drama lately. I do hope you are holding up. I am sure your garden and kitties are much solace. My thoughts and prayers will be with you and yours.

Well, I'm not afraid of rats but I'm lucky not to have them in my garden. And I see it like you, animals are people too... even my mostly hated spiders.... huaaaaah! I can jump on a chair, when a see such a big black hairy one.
However you really had a tough time with the illness of your parents. I wish you a lot of power and I really hope that your dad get's well in reasonable time. I guess it would be wrong to wish the same for your mother with Alzheimer... that's such a cruel illness.
Take care and enjoy your wonderful garden and cats.
Kind regards
Alex

One's of my mum's cats used to catch, kill then leave them on the back doorstop!
Take care, and happy gardening! Flighty xx

ye, someone killed and disemboweled a bunny in my yard, and i didn't take photos either. it was sad, baby bunny fetus strewn about... wasn't my dogs, maybe a coyote?

sorry to hear about your MIL... we are facing parental illnesses as well. i'm working hard in the garden to stay healthy and maybe have a better fate? good luck to you too!

I am afraid that rats tend to come for the chickens' food. You can discourage them by putting the food away overnight, but rats will live anywhere there are people.

I am sorry to hear about your family -- it is very worrying. We have recently had a scare with one of our family members too. She is still recovering in hospital, and will be there for a while. May your garden comfort you.

Seedlings, chooks, cats, flowers! :) What more could I want to see?

Sorry to hear about your MIL but glad your dad seems to be doing OK.